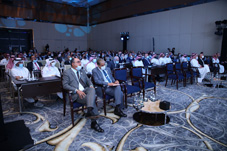 The 3rd MENA Desalination Projects Forum, taking place at Conrad Etihad Towers Abu Dhabi from March 15-16, 2022, examines the depth of the situation in water scarcity and desalination projects and discuss way forward – in line with the climate change target and reduction in emissions by 2030 and 2050

“The Middle East and North Africa (MENA) region represents about 48 percent of the total desalinated water output in the world. The UAE – the second largest desalination market in the world after Saudi Arabia – generates about 14 percent of the total desalination water output,” Engineer Khadija Bin Braik, Director of Water Pricing and Tariffs at the Abu Dhabi Department of Energy, said in her keynote address.

She said, Abu Dhabi has an installed capacity of 960 million imperial gallons of water production capacity per day (MIGD), while its peak demand is 833 MIGD – leaving enough spare capacity.

“The water and energy sectors are changing at an unprecedented speed. With the global Net Zero Target by 2050, we now have a real momentum to achieve carbon neutrality target. Abu Dhabi is a real change-maker in delivering a low-carbon economy,” she said.

“We have nine desalination plants of which four runs on Reverse Osmosis (RO) technology providing 24 percent of the desalinated water. With new technology and investment, we are going to raise RO desalination capacity to 40 percent. This is energy and cost efficient and will reduce the cost of desalination and ensure great savings.”

Seawater desalination capacity of GCC countries is expected to grow further by approximately 37 percent during the next five years, with investments of up to $100 billion, according to reports. The global desalination market is predicted to grow from $17.7 billion in 2020 to $32.1 billion by 2027.

The news comes as 3rd MENA Desalination Projects Forum takes off today at the Conrad Abu Dhabi Etihad Towers Hotel, UAE, that examines the depth of the situation in water scarcity and desalination projects and discuss way forward – in line with the climate change target and reduction in emissions by 2030 and 2050.

The rising demand for desalinated water, growing investment and increasing number of desalination projects come under focus at the two-day forum that also focusses on the widening current annual desalination demand gap of US$104 billion – that could jump to US$300 billion to US$400 billion per year in a few years’ time.

It is the largest government-endorsed regional desalination conference that brings together over 400 regional and international stakeholders from the government, consulting, contracting and technology sectors to discuss the way forward for the region’s desalination industry, key upcoming mega projects, and national sustainability visions driving the region’s 2030 water agendas.

More than 150 C-Suite Executives (CEOs and MDs) including more than 30 speakers, panelists are participating at the conference and exhibition where more than 30 exhibitors and sponsors display the latest innovation and technologies at the two-day event.

Water scarcity in the MENA region has already become a challenge to development. This scarcity will only grow over time due to increasing population, expected economic growth, and the likely impacts of climate change on water availability and demand, says World Bank.

“According to our analysis, even if all viable demand and supply management measures are implemented, the total cost of closing the water demand gap will be approximately US$104 billion per year. This cost easily could go as high as US$300 billion – 400 billion a year if none of the demand management options is adopted.”

The MENA region contains more than 6.3 percent of the world’s population, but less than 1 percent of global water resources. Making up the predicted MENA water deficit in 2025 will require the production of an additional 237 billion cubic metres of potable water. By 2050, water scarcity could cost MENA between 6-14 percent of the entire region’s GDP each year.

While these numbers are not encouraging, there are changes, opportunities and advancements in the MENA desalination industry that provide hope for a sea-change in the region’s water security prospects. Saudi Arabia and the UAE now use desalination to supply over 50 percent of their national water needs. These countries are world leaders in attracting, supporting and leveraging desalination technology.

Dr. Hussein El-Atfy, Secretary General of AWC, says, “The future of Arab water security will largely depend on the development of the NCWR as a strategic perspective which is no longer an option but a must to face the escalating water scarcity crisis.

In Saudi Arabia, the Saudi Water Partnership Company (SWPC) has announced that commercial operations on the Jubail 3A independent water producer (IWP) project will commence in the last quarter of 2022.

Around 48 percent of the world’s water desalination projects are taking place in the MENA region, pushing investments to a predicted $4.3 billion by 2022.

This shows that MENA is ready to capitalise on the strength of its existing desalination industry as well as its abundant potential for producing renewable energy. As the monetary and energy-related costs of producing desalinated water continue to fall, capacity will steadily rise across the region.

Leila Masinaei, Managing Partner, Great Mind Events Management and organizer of the 3rd MENA Desalination Projects Forum, says, “The depth of the water scarcity is getting from bad to worse. The governments of the MENA countries are seeking alternative ways to generate clean water, without harming the environment. Although there are new sustainable sources of generating water, such as from air, desalination still now remains one of the most viable sources to feed large communities. That way, the Middle East Desalination Projects Forum is one of the most important industry conferences that highlights the challenges as well as opportunities.

“We are happy to curate such an important industry conference and bring all the major stakeholders in this important event where senior government officials, private businesses, contracting companies, project consultants and water experts will discuss key issues such as new technology, reducing the cost of desalination, sustainability and energy efficiency at the two-day conference.

“Great Minds Event Management brings some of the strategically important industry events that are crucial for the future development of economy and society of the MENA region.”

Frederic Claux, Managing Director Thermal & Supply AMEA at Engie, said, “We are delighted to be supporting the 3rd MENA desalination conference, as gold sponsors. Events such as these bring together key regional stakeholders to discuss and seek sustainable water solutions. With a global ambition to achieve NetZero Carbon by 2045, we are driving RO technology adoption.”

Marouan El Khattabi, Middle East Director at GS Inma, said, “The 3rd MENA Desalination Project Forum is the biggest industry event and a great platform for networking and business development. We are really happy to see the most important industry players here and we are looking forward to develop our business from this platform.”

GS Inma has been awarded to build two desalination plants in Oman, he said. “We are looking for more. There are many water projects that are being unveiled in this conference – which is really good for the industry and for all of us.”