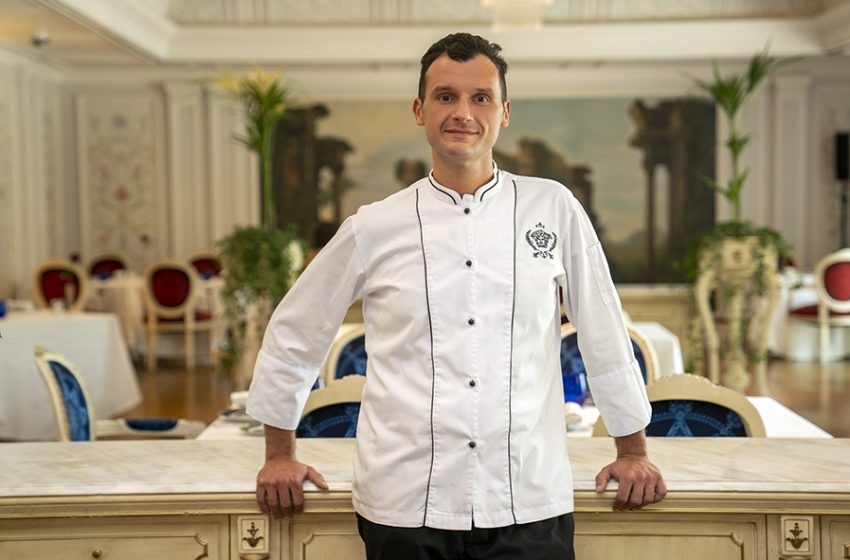 Luca Crostelli brings a traditional approach to Italian cuisine so guests can get a true taste of Italy.

Dubai – 2022: Palazzo Versace Dubai announced the appointment of Luca Crostelli as the new Chef De Cuisine at Vanitas, the hotel’s signature Italian restaurant. An ambitious Chef De Cuisine with expertise in menu creation and execution, Luca brings a strong touch of Italian tradition to Vanitas, as well as an authentic taste driven by top-notch ingredients.

With over 20 years of international industry experience and Michelin star expertise under his belt, Luca has worked at numerous renowned restaurants and brings with him a proven track-record of excellence in leadership and managing kitchen teams.

Hailing from an Italian family of chefs and restaurateurs, Luca has always had enormous passion for food, as hospitality practically runs in his blood. Born and raised in the heart of Italy, Chef Luca began his professional culinary journey in in his home country in 2007 as Commis De Cuisine, honing his expertise in purely Italian cooking.

In 2009, Luca joined the Michelin-starred Restaurant Casa Vissani, where he worked for three years and quickly rose through the ranks to evolve into Chef de Partie in the restaurant’s pasta section while also passing through all sectors of the kitchen and participating in the creation of an Italian Kitchen Encyclopedia.

Luca continued to expand his culinary journey across Italy, joining Ristorante Enoteca Pinchiorri, also Michelin-starred, in 2012, taking charge of managing consignment food inventory, participating in external events, including the catering operations for the opening of one of Italy’s biggest wineries, Antinori.

In 2014, Luca moved to Switzerland to join the Michelin-starred Northern Italian restaurant Il Lago at Four Seasons Hotel Geneva, where he gained a wealth of experience in hotel’s F&B, overseeing the preparation and execution of banquets, as well as managing room service and the hotel’s breakfast service.

In 2016, he took on a new project alongside renowned Chef Saverio Sbaragli at Restaurant Tosca, where they successfully achieved the reconfirmation of the first Michelin star at the restaurant, and the recognition of BIB Gourmand of the Michelin Guide to the Puccini Bistrot.

Three years later in 2019, Chef Luca moved to France to take the position as Chef De Cuisine at the seasonal fine dining restaurant Dolceva, at the renowned Pan Deï Palais Hotel in Saint Tropez. Thanks to his successes in the F&B world, entrepreneur and founder of M3 GROUPE Abdallah Chatila asked Luca to return to Geneva to oversee the set-up of M3 RESTAURANTS, which also included the creation of a fresh pasta laboratory and an Italian restaurant, as well as the managing of the kitchen of the Restaurant Cheval Blanc in Vandoeuvres.

In his new role as Chef De Cuisine at Vanitas, Luca is responsible for overseeing kitchen operations as well as menu curation and development, currently masterminding the revamp of the restaurant’s menu to create delectable new F&B offering, featuring wonderfully authentic classic Italian dishes using only the highest quality products and ingredients.

Chef Luca enjoys being on the floor and interacting with guests, always open to feedback and keeping tricks up his sleeve, which allows him to visit diners at their tables, introduce himself and finish their dishes in front of them table-side to add a personal touch!