A green hub for the community: What to expect at the newly opened Holiday Inn & Suites Dubai Science Park

Perfume Layering: What Is It All About

The Tennis-inspired Pieces To Invest In Now

A green hub for the community: What to expect at the newly opened Holiday Inn & Suites Dubai Science Park

FIRST OF ITS KIND SAUDI STOPOVER VISA AVAILABLE FOR THE WORLD 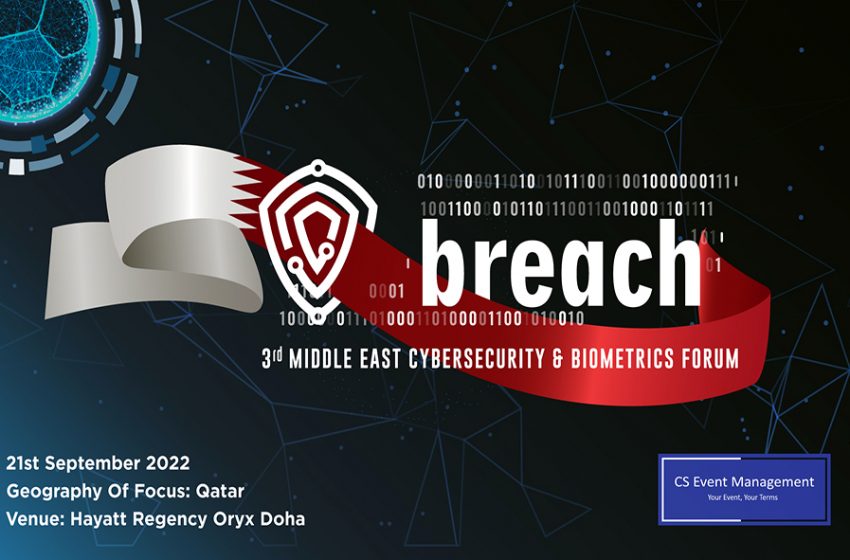 Dubai-based CS Events brings Breach – 3rd Cybersecurity and Biometrics Forum – to shed light on growing cyber threats in the Middle East ahead of the FIFA World Cup 2022 in Doha, Qatar, as experts predict a surge of cyberattacks by hackers trying to steal personal data of people traveling to watch World Cup football matches.

A data breach is becoming the single largest threat to businesses in the Middle East, with the cost per data breach has grown to US$6.93 million per attack in the UAE and Saudi Arabia, according to a recent IBM report, based on an in-depth analysis of over 500 real-world data breaches occurring over the past year across 17 countries, including the Middle East region, and among 17 different industries.

With Qatar hosting the upcoming FIFA World Cup this year, cyber experts predict a surge of cyber-attacks by hackers trying to attack the personal data of people traveling to witness the massive global event. “The Supreme Committee for Delivery and Legacy has already issued a cyber security framework ahead of the World Cup preparations to set the required benchmark for all parties involved in the implementation of the mega sports event. This framework identifies the cyber security requirements to protect national critical infrastructure supporting the FIFA World Cup and focusing on the Qatar Nation Vision 2030 as a long-term commitment,” a recent statement says.

According to the IBM study, the Middle East region is the second highest average breach cost amongst the 17 regions studied. The study on organizations surveyed in the Kingdom of Saudi Arabia (KSA) and the UAE suggests that security incidents became more costly and harder to contain due to drastic operational shifts during the pandemic.

“The financial impact of these security incidents in the Middle East has risen by 6 percent over the past year and has reached the highest cost in the report’s 8-year history in the region,” IBM said in the report. “These data breaches cost companies studied in the region $6.93 million per breach on average, which is higher than the global average of $4.24 million per incident.”

The Middle East cybersecurity market size is projected to grow at a Compound Annual Growth Rate (CAGR) of 17.1 percent from US$20.3 billion in 2022 to US$44.7 billion in 2027, according to another industry report. The increased sophistication of cyberattacks across heavy industries will result in financial and reputational losses due to digitalization and warrant stringent government regulations.

As part of the ongoing conversation, CS Events will host the 3rd edition of the event – Breach-3rd Middle East Cybersecurity & Biometrics Forum – on September 21, 2022 in Doha, Qatar.

Breach-3rd Middle East Cybersecurity & Biometrics Forum will share light on the biometrics and cyber security landscape in Qatar which will gather security and technology professionals from ministries, government public and private systems.

‘Breach Forum’ is the most influential gathering that will focus on Qatar Nation Vision 2030 strategy to strengthen capabilities to fight cyber-crime, control cyber threats and improve biometric-enabled technology to deliver improved government e-services to citizens and residents.

The event will be attended by 150+ senior delegates which include the CIO, CISOs, Head of Cybersecurity, IT Audit, OT Security, and Biometric to mention a few from cross-industry within Qatar region to gain knowledge and insights from the top industry leaders and experts from the region.

“Participants at the Breach-3rd Middle East Cybersecurity and Biometrics Forum will be able to listen to the experts, latest industry reports on the extent of the cyber threats as well as new solutions to protect their businesses, servers, data and ensure smooth business continuity.”

The IBM report finds, that businesses were forced to quickly adapt their technology approaches last year, with many companies encouraging or requiring employees to work from home, and 60 percent of organizations moving further into cloud-based activities during the pandemic. The new findings suggest that security may have lagged behind these rapid IT changes, hindering organizations’ ability to respond to data breaches.

The annual Cost of a Data Breach Report, conducted by Ponemon Institute and sponsored and analyzed by IBM Security, identified the energy sector, financial services, and healthcare as the top three industries per record cost of a data breach in the Middle East region.

The study also found that breaches cost companies surveyed in Saudi Arabia and the UAE $194 per lost or stolen record on average. While phishing attacks were the most common root cause of breaches that target organizations in the region, followed by stolen user credentials such as name, email and password.

Breach forum will also provide an opportunity for technology and vendor companies who are looking forward to showcasing their products and services and cater the Qatari region, The confirmed sponsors include MICROSOFT, CYBER KNIGHT, CloudSEK as the Lead Sponsor, Platinum Sponsor and Exhibitor respectively.

A green hub for the community: What to expect at

FIRST OF ITS KIND SAUDI STOPOVER VISA AVAILABLE FOR THE