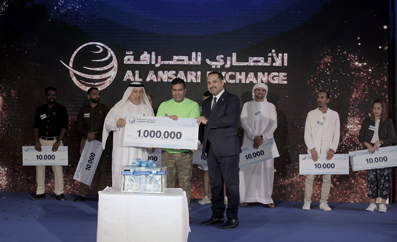 Dubai, 19 September 2022: Al Ansari Exchange today crowned Sajad Ali Batt Abdul Samad Batt, from India as the 9th millionaire of its annual Summer Promotion. The draw took place in the presence of senior officials of Al Ansari Exchange, the Department of Economy and Tourism in Dubai and members of the media, and was streamed live via the company’s social media platforms.

Sajad Ali Batt Abdul Samad Batt, an Indian national, became eligible for the draw after sending AED 2,327 through one of Al Ansari Exchange branches.  In addition to the grand prize winner, Sabri Alozaibi, a Yemeni expat, emerged as the winner of a brand-new Mercedes Benz, while Junaid Ahmed Sajjad Zaheer Joiya, an expat from Nepal and Keshar Hum Bahadur Karki, a Pakistani national walked away with half a kilogram of gold each in the latest edition of the Al Ansari Exchange Summer Promotion.

Ali Al Najjar COO of Al Ansari Exchange, stated: “We are proud to announce another successful annual Summer Promotion concluded in August 2022, witnessing over 7 million entries. We extend our warmest congratulations to Sajad Ali Batt Abdul Samad Batt, for becoming Al Ansari Exchange’s 9th millionaire. We also congratulate all other campaign winners and express our gratitude to our sponsors Bank Alfalah and Banque de Caire for their support and of course our valued customers for contributing to the success and continuity of this campaign that has been running for 9 years in a row. This achievement is a true reflection of our customers’ trust in our services as we continue to see growth in participation across all the emirates.”

Al Ansari Exchange’s Summer Promotion 2022 ran from 1 June to 31 August 2022. The draw was open to all eligible transactions made via the Al Ansari Exchange app, digital channels, as well as through any of the company’s more than 220 branches.