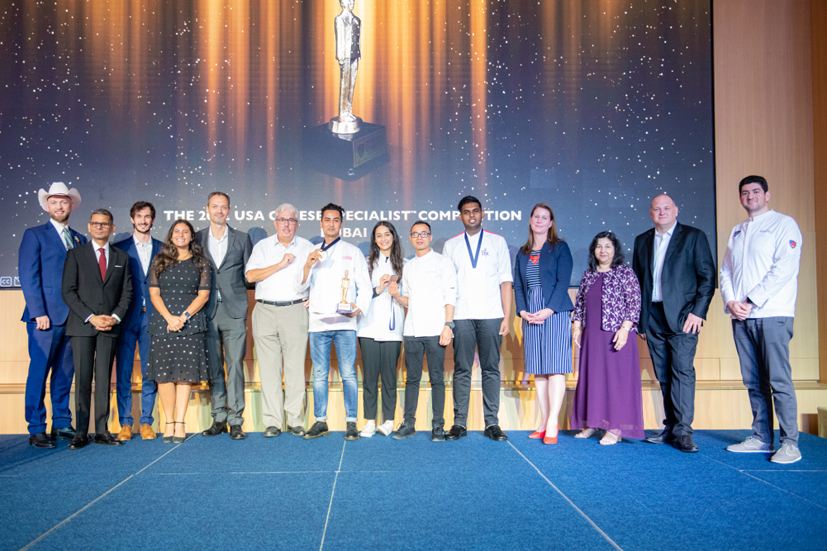 The announcement came during a glittering award ceremony at the Taj Exotica Resort & Spa, The Palm, following two days of intense competition, which saw 11 chefs, all alumni of The USA Cheese Specialist™ Certification Program, competing for the coveted gold medal.

Speaking at the award ceremony, judge Chef Antonio El Khoury, Director of Culinary Programs MENA for the USA Cheese Guild and Instructor of the USA Cheese Specialist Certification Program at ICCA, highlighted the incredible cooking techniques of each chef.

He said: “The way in which all chefs have utilised USA Cheeses is incredible. The winning entries showcased a combination of creativity and uniqueness, which was further underscored by the incredible flavours and look of the dishes. Every one of the chefs displayed outstanding cooking techniques to produce such an exquisite menu. Congratulations to all the finalists, particularly chef Thapaliya, who displayed an incredible knowledge of the cheese and how to utilise their flavours to the fullest.

“Cheeses from the USA are growing in prominence and penetrating the industry regionally and globally through the USA Cheese Specialists. They have been instrumental in spreading the word about the quality, variety, and versatility of USA Cheeses, which has resulted in many of the commodity and artisan speciality cheeses competing on the most prestigious cheese stages in the world.”

The silver medal was shared by chef Bikram Lakha who is currently working for Five Palm Jumeirah Dubai, and chef Sara Ali, an ICCA alumna. Chef Lakha used U.S. feta, U.S. cream cheese, and U.S. parmesan to produce an appetiser of beetroot ravioli with truffle and a chicken tandoori roulade with sauteed vegetables and creamy mint sauce as a main course.

They were joined by Amy Foor, Vice President, Global Foodservice Programs at the USA Cheese Guild, who said: “We ultimately created this competition to provide a platform for the graduates of the USA Cheese Specialist Certification Program to display their advanced cheese knowledge and exhibit their application, innovation, and presentation skills – which they have done in abundance.

“This forms a major part of how we increase awareness of Cheeses from the USA by targeting local trade and consumers through education programmes. Congratulations to all those involved; it has been an incredible week for showcasing USA Cheeses.”

Today the United States produces a quarter of the world’s cheese output and is home to over 1,000 cheese varieties produced throughout all 50 states. In addition to supporting global demand for cheese, the country is developing a reputation for creating some of the tastiest cheeses on the planet, winning a host of accolades in recent years at the World Cheese Awards and the World Championship Cheese Contest.